Students are only required to do 5 of the things on the challenge list. The books that are already on the website are just suggestions. They are not required reading. 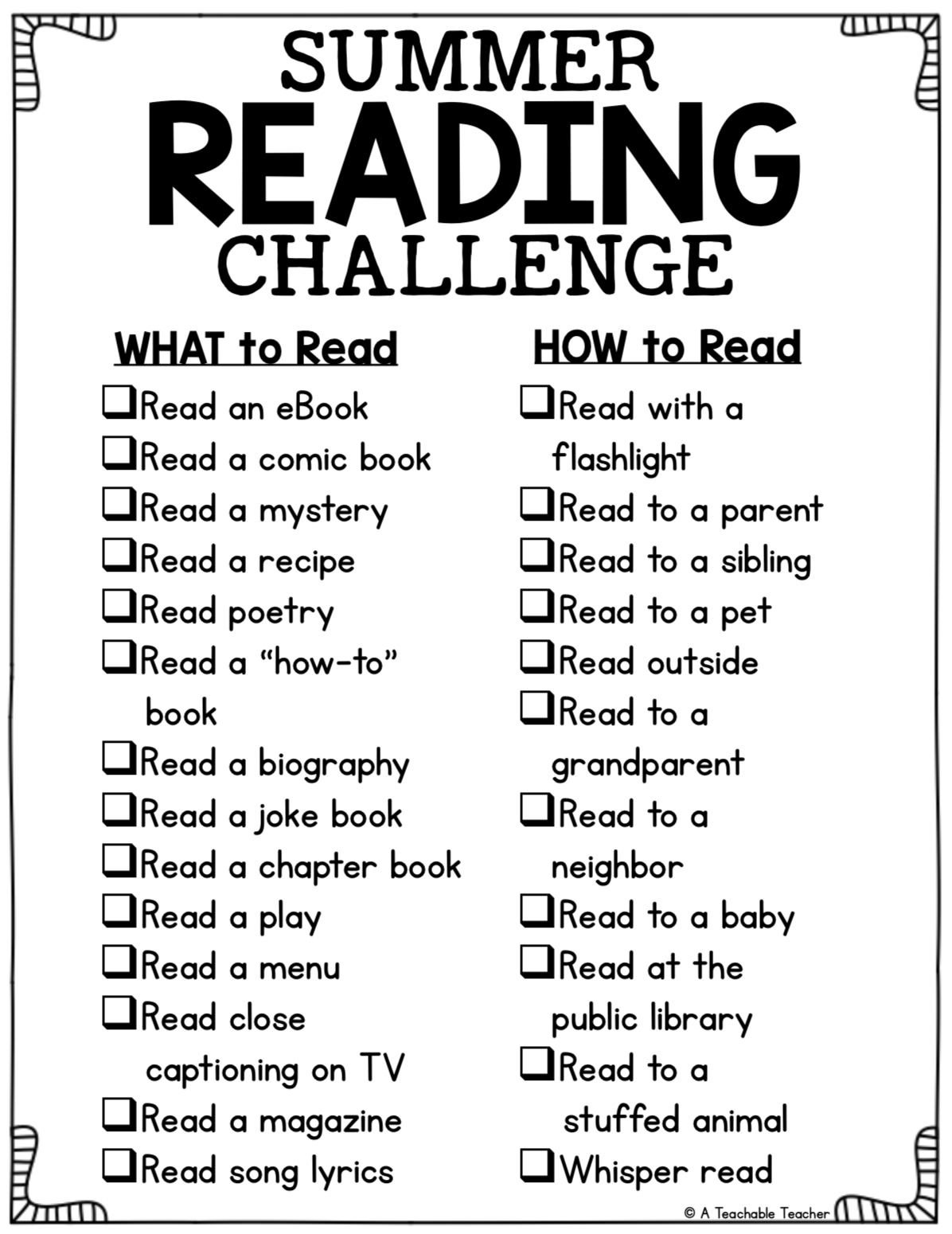 The 39 Clues
various authors, 2008-2014. (Mystery Series) Amy and her younger brother hunt for the 39 clues that will reveal what
really happened to their parents as well as other family secrets. Other Formats: (e) + (The Infinity Ring series
is another choice).
The Case of the School Ghost (Buddy Files Series #6) by Dori Hillestad Butler
Buddy, a dog, goes to the fourth grade sleepover with Connor. Strange things happen, and Buddy wonders if the rumor about
the school ghost is true. Other format: (e) (Butler’s The Haunted Library series is also a good choice.)
Dying to Meet You (43 Old Cemetery Road Series #1) by Kate Klise
(Humorous Series; Ghosts) Suffering from writer’s block, author I.B. Grumpy moves into a quiet, mysterious old mansion
to solve his problem. However, a boy and a possible ghost have other ideas. This witty tale is told through letters,
emails, and newspaper articles. (Klise’s The Show Must Go On series also is a good choice.)
Allergic to Camping, Hiking, and Other Natural Disasters (Alvin Ho Series #2) by Lenore Look,
Alvin’s fears are ignited when his father suggests a camping trip. Alvin’s escapades are a riot. Other formats: (e) +
Bad to the Bone (Down Girl and Sit Series) by Lucy Nolan
Told from a dog’s point of view, Down Girl shares how she and her friend teach their masters to provide more attention.
Other format: (e)
Haunted Castle on Hallow's Eve (Magic Tree House Merlin Mission Series #2) by Mary Pope Osborne,
Jack and Annie are transported to King Arthur’s time to solve a mystery about a stolen diamond. Other formats: (e) +
(A to Z Mysteries Series #1) by Ron Roy
These 26 books feature a title for each letter of the alphabet. Other formats: (e) +

Gone Fishing by Tamera Will Wissinger
A Novel in Verse, 2013. (Realistic, Poetic Verse). Sam and his father have a fishing trip planned, but somehow his little
sister, Lucy, convinces Dad to include her. What’s even worse, Lucy begins catching more fish than Sam!! Other format:
(e)

The Day the Crayons Quit by Drew Daywalt
Duncan receives letters from all his crayons with complaints about how and how much he uses them. What’s an artist to
do? Other format: (e)
The Man Who Walked Between the Towers by Mordicai Gerstein
This stunning picture book captures the magic and drama of a true story – when Philippe Petit walked a tightrope between
the two World Trade Center Towers in 1974. (Caldecott Medal). Other formats: (e) +
Thank You, Mr. Falker by Patricia Polacco
Trisha loves school but has difficulty learning to read and feels dumb. In fifth grade, a new teacher helps her understand
and overcome her problem. Other formats: (e) +

On a Beam of Light: A Story of Albert Einstein by Jennifer Berne
Readers see Einstein as a boy and then a man who delights in being curious and posing thoughtful questions. Other formats:
(e) +
Becoming Babe Ruth by Matt Tavares
Ruth comes from family with many problems, and the young boy is frequently is in trouble. At seven, his father brings
him to St. Mary’s Industrial School for Boys, and the people he meets and the school discipline change his life.
He later becomes a star player for the New York Yankees. Print format only.